The 3 Goth Stages of Life

What makes a young guy or girl get into being goth and what happens when they get older? Do they ever really just get out of it, or do they always stay a little bit goth in their hearts?

This post is going to answer those millions of questions all of you non-goths out there have that make us goths reel with derision when we hear them (goths are nodding knowingly about now).

WE HATE THAT ONE.

It always puts us on the spot as suddenly being a representative an of entire sub-culture that most of us, quite frankly, only vaguely understand ourselves.

Ok, I’m going to geek out a bit on you here, but the goth sub-culture has been a massive part of my life and still is, so I think about it a lot and have a lot to say about it.

I got into the goth sub-culture when I was 25. That’s actually pretty late by goth standards. But like most goths, it was the music that called to me. I was living in Athens, Georgia, my university town and capital of underground music in the U.S. I regularly saw live bands and listened to the college radio, dated musicians and had musician friends. Yet, most of the bands I heard were not goth and I only had a vague idea of goth being some style of dramatic make-up that some people wore. Then one day while driving down into Atlanta I heard the exquisite voice of Siouxsie Sioux in a dark and tribal song from The Creatures. “What is THIS?” I demanded of my passenger friend. He told me and I vowed from then on, “I have GOT to go to the kind of clubs that play THIS kind of music!” I can remember everything about that moment. It was like nirvana for me. *

And that was it.  That’s all that I needed to become goth.

I started listening to The Creatures and getting into anything else described as ‘goth’, hungry for more of that dark and tribal, often industrial beat. It was a while until I finally went to my first goth club while living in Boston. By then I’d grasped the style and found I’d always unknowingly had it–a love of velvet and lace. I went by myself because I didn’t know any other goths, but I met an awesome chick there right away who gave me a giant penis-shaped chocolate popsical! I danced most of the night while licking my chocolate penis and felt like I’d found my people.

As in any sub-culture, the beginning of ‘membership’ begins with learning the codes. This is what the Babybat stage is all about. It’s looking around at other goths and experimenting with the style of dress, the mannerisms, the make-up, the hair, and the Things To Know, like the history of the Batcave, the club that spawned it all years ago in London.

It’s about practicing that winged eye-liner.

It’s about dancing in platforms without tripping.

It’s about learning how to clean and care for sweat-drenched PVC.

And how to lace a corset.

And how to make hair HUGE.

You start to wear a lot of black. Almost entirely, actually…

But it’s also about embracing the darker side of life; a less conventional life philosophy that questions religion, questions mainstream culture, and is generally more poetic and romantic than what conventional culture celebrates and upholds as what we should aspire toward. 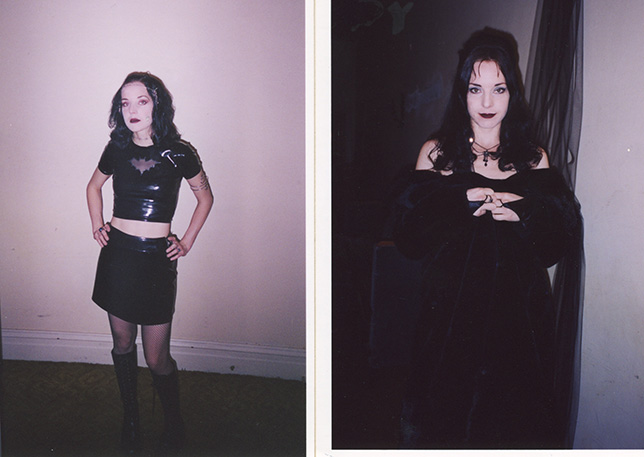 PVC babybat Christine. Not smiling. These photos are so old I had to scan them to get them online!

It is very much a sub-culture of introverts, artists, free-thinkers, and creative types, if you want to make one sweeping generalization.

My true babybat stage began in Perth, Australia, where I fell in love with a guy at a goth club and dyed my hair black. We moved to Melbourne and found another babybat as a housemate, and started regularly going to goth clubs together. My goth wardrobe grew, my theater make-up collection grew, white foundation and all, and I started making many goth friends. I became full-blown goth.

My (now deceased) ex from Perth and I dressed for a Marilyn Manson concert.

After many years of this, I eventually progressed to…

At this stage, you know all the codes.

So you start to break them.

You wear white to the club.

Or you smile a lot.

It horrifies most of the goth patrons. 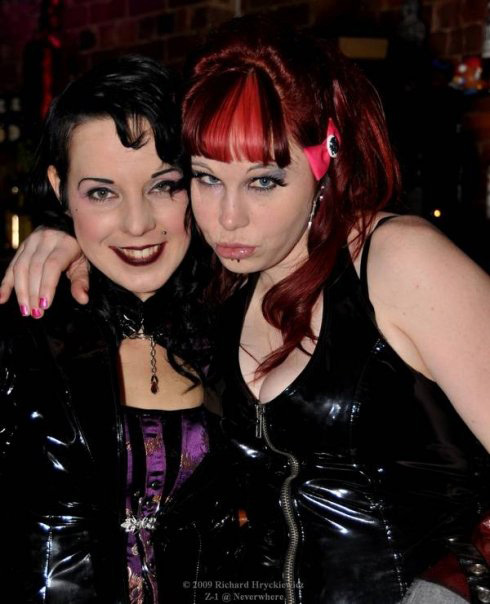 Me in full PVC goth mode with a close girlfriend. Smiling way too much.

But you don’t give a crap anymore because you know everyone and the club organizers are your friends. You get mistaken for being a snob by insecure goths who see that you’re having a great time but never actually bother to come meet you.

Elder goth stage is not about age, it’s about knowing the culture intimately, being comfortable in it, having many friends who are in it, and just having a great time when you go out. Elder goths start getting bored of goth culture and branching out into different clubs, different music. They start wearing different colors, too. 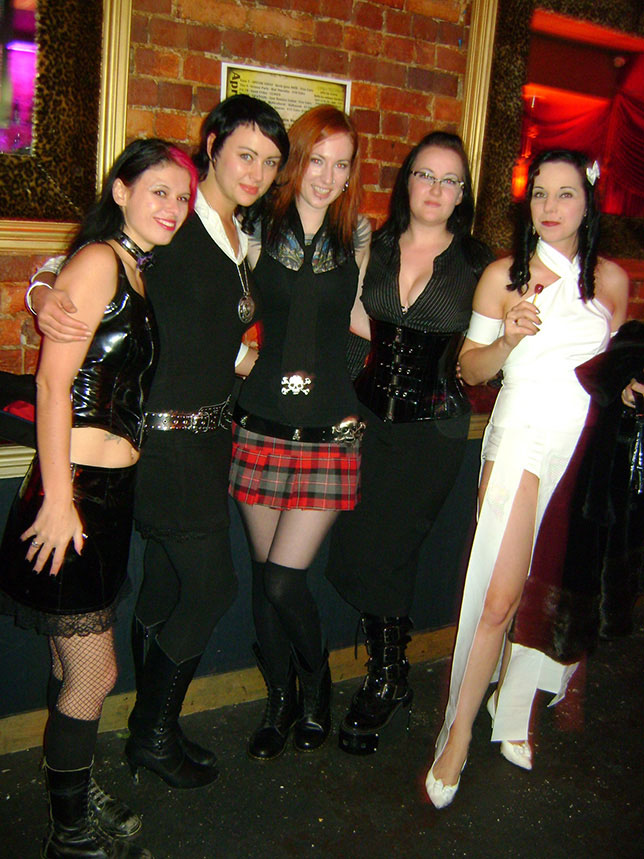 Wearing a completely white PVC costume I’d made for an electro club but wore to goth clubs anyway ’cause who cares, with a group of gothy girlfriends.

I loved this stage because I never had to pay to get into clubs, got lots of free drinks, and was really into making elaborate costumes that worked for other clubs, not just goth clubs.

You think this is a joke but it’s not, there really is a recovery stage for goths. This is marked by the emergence of one phrase every goth has said and heard.

And it is complete bullshit.

We are all not goths.

“Not really. Like, I use to be but…not anymore.”

This stage is marked by goths having lots of non-goth friends, not dressing like babybats anymore, rarely going to goth clubs, and generally just having less tunnel-vision about how to experience music and well, life, in general.

Parents applaud and are glad you finally “grew out of it” or, like my mother said to me, “removed that thing in your face.” hahaha.

But, my little cygnets, NOBODY who was ever goth is EVER not goth truly, there will always be a little black cache deep in their hearts where the years of eyeliner ended up.

Recovering goths embrace either not looking at all goth or have updated their look with a modern goth style, so that they can basically just not look like babybats.

They still pull out Sisters of Mercy now and then.

They still have a skull somewhere in their house, in home decor or printed form.

Some of these updated goths may even still proudly call themselves goth but they have recovered from that kind of goth, you see?

They don’t look like they are trying to be anything other than who they are. 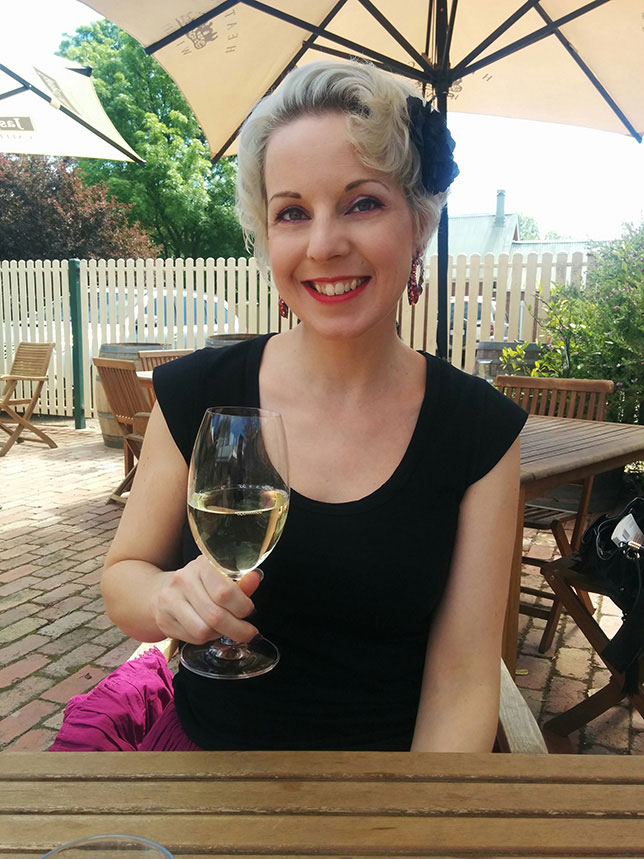 Me just a few months ago, blond and looking more pin-up than goth, but still loving my black! You can see the hole in my face where that ‘thing’ use to be.

The three stages of goth are all about  self-discovery and self-expression through related interests with other people, which anyone in any sub-culture experiences in exactly the same way, whether it be goth culture, religious culture, fetish or footy culture, whatever.

It just so happens that goth culture revolves around darkness, drama, and the color black.

If anyone asks, “what is goth?” the easiest and most boring answer is to say, “It’s a sub-culture,” which leaves it to them to figure out and is far less-intriguing and threatening, but also less fun, than saying, in as serious tone as possible, “death.”

So, what got you into goth and what stage are you at now?

Or, for non-goths, what questions do you have about the goth sub-culture?

Happy to answer any.

Eco Anxiety Made Me Ditch a Normal Li...

a company on a mission to transform creative and unconventional women struggling with ugly duckling impostor syndrome into badass, high-earning online entrepreneurs and world-traveling digital nomads with my S.W.A.N. Transformation Marketing Strategy. 🦢