Why You Shouldn’t Feel Ashamed of Taking a Selfie

Are you a selfie-taker or a selfie-culture shamer?

I find most people are divided about selfies. Either they can’t stand seeing someone take a selfie in public, or they are the ones doing it.

Since I belong to the latter, I’ve had to do a bit of contemplation about selfie culture, if only because the divisiveness over it will eventually lead to some kind of confrontation where I need to defend myself.

Either silently, when I come across an article lambasting our ‘increasingly narcissistic selfie culture,’ or vocally when my own boyfriend called me a narcissist.

He’s not my boyfriend anymore btw… 😂

And I enjoy looking at other people’s selfies.

So what is wrong with doing something that I enjoy?

Every day we get bombarded with images of those people, the far-from-average.

Those images can have a suffocating conformity about them, from the ever-presence of flat-ironed hair to the waif body standard of the mass media. It’s really not good for us; our self-esteem, the way we see ourselves in the world.

Too many of the same kinds of images and we begin to feel we don’t belong.

Eventually, you get girls vomiting up their dinners like cats choking on hairballs because they licked up too much fur.

My defence of the selfie is a feminist one.

Because this is a feminist issue.

Let’s face it, the majority of the mass media images are of women; we are the ones suffering under their oppressive rule.

In our face on every billboard, every magazine cover, every ad, every commercial.

Most men can’t even begin to get how unrelenting the screaming messages in these images are in our ears.

Men are not being whittled down on a daily basis by images of men in swimsuits with six-pack abs telling them to waste yet more of their money on yet more fucking skin cream.  Every. Place. They. Look.

But selfies are of average women taking photos of their unique bodies that they have only themselves to manage, as opposed to a team of personal trainers, chefs, beauticians, and whatnot.

Pics of their personal style, the clothes they bought themselves and put together themselves, every piece handpicked with their unique sense of style.

Photos with their character written in the expressions of their faces and the context of where it was taken, which is totally unique to them.

All of this does not need to compete with anything the mass media has to offer because it is 100% that one individual’s life.

It is, therefore, a kind of self-hood celebration which another person might find totally fascinating.

So what does it mean when someone scorns selfie-culture?

I think it means that person does not believe in the active celebration of their own image in the world.

That participation in sharing their own image is vulgar.

A selfie can defy the conformity of images we are indoctrinated to accept–the ones forced upon us rather than the ones we create ourselves.

How dare we defy that culture?

And how dare we like the way we look?

So what if a young woman feels good about the way she looks.

Most women put a lot of effort into looking good so I certainly hope that they can feel good about it when they are done!

There’s a lot of women taking selfies who put no effort into looking good, so are they narcissists too?

Now see, we come to the crux of the selfie-shamer: level of narcissism = level of effort put into looking attractive.

Is that right? What?

Last time I checked I knew hundreds of women who put a lot of effort into their looks yet still were compassionate, thoughtful, generous women–not the definition of a narcissist at all.

A narcissist is someone who puts themselves before someone else. They direct the conversation back to themselves. And lack the ability to empathize with someone else.

Calling someone a narcissist for taking a selfie is both offensive and disrespectful. It’s also an ignorant use of a term for a real mental disorder.

Why disparage someone for doing something that they enjoy and that makes them feel good?

Aren’t there worse things to get cranky about in this world?

We women know that there is a boundary line between how far we will take our efforts at looking good and how important it really is for us to put in that effort in order to feel good about ourselves.

It varies with every women but one thing you can be sure of is every woman does a tight-rope balancing act at how far she wants to take the beauty standard onboard.

Everything we do or don’t do from shaving our armpits, painting our nails, pencilling in our eyebrows.

All those millions of efforts we negotiate on a daily basis–we have really thought about it and decided that it does or does not contribute to our inner-well being.

Some women have a high standard, some have a low one, but whatever it is, a selfie says “I accept this,” “I celebrate this.”

It is ultimately a countercultural act to take a selfie and share it in this world of mass media and it’s all-prevalent all-conforming images.

Let selfie-shamers remain flies, flat on the walls of the world, observing quietly, not imposing themselves.

While we who are alive and expressive stir shit up by celebrating our own lives and those of others, intimately, defiantly, and socially! 🦟 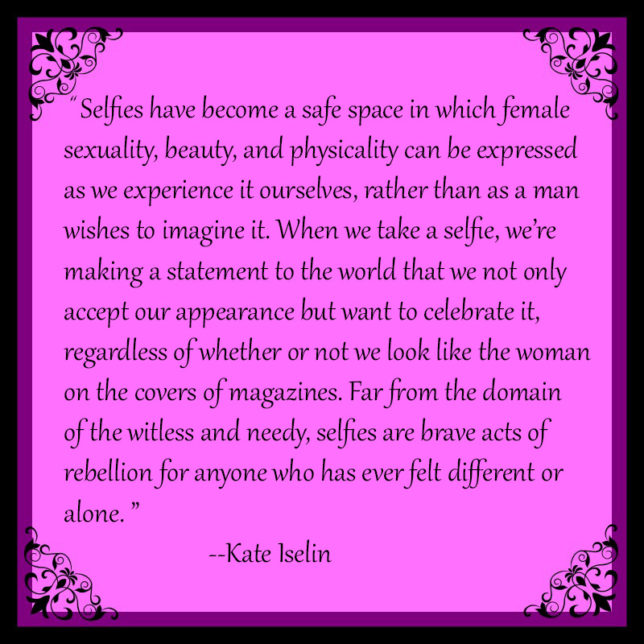 How to Become a Social Media Manager & Digital Nomad

Facebook for Business Tips to Try Before You #deletefacebook

Social Media Marketing Not Working For You? You May Be Missing Some Essential Pieces

a company on a mission to transform creative and unconventional women struggling with ugly duckling impostor syndrome into badass, high-earning online entrepreneurs and world-traveling digital nomads with my S.W.A.N. Transformation Marketing Strategy. 🦢